To commemorate the Tenth Annual Am-Am!!, The Tee Times decided to catch up with the true founder of the event. Here, breaking its silence for the first time since the original Am-Am!!, is The Pagoda. 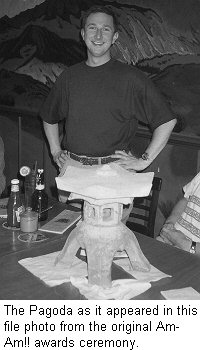 Tee Times: Thank you for taking the time to see us.

Pagoda: It's my pleasure.

TTT: First, how have you been?

P: I've been well. I've found that Santa Cruz agrees with me.

TTT: In what way?

P: Well, I've always liked the fog and I've made lots of new friends. They are yellow and slimy. They like the shade of my roof.

TTT: Tell us about your memory of the first Am-Am!!

P: Mostly shock. Really I had been minding my own business near the hose, when early one morning I was scooped up and put in a plastic bag. I sat for hours in the trunk of a really hot car. Occasionally, we'd drive somewhere, and then stop again. It was like someone was trying to get me lost so I wouldn't remember how to get back again.

P: Oh, really? Well, let me finish. At the end, I was taken out of the car and the plastic bag, and brought into the middle of a noisy bar. I was placed on a table in the middle of some other things, like some beer cans, a box of Rice-a-Roni, something called Turtle Wax (why do turtles need waxing?) and a really ugly brass candlestick. All the humans were drunk or sunburned, and a number were both. No one would buy me a drink. They all kept pointing and laughing at me. I realized the guy who was laughing the loudest was the guy who had stuffed me in the car in the first place. For some reason, he got the first pick of which object to take home. Want to guess what he took?

P: Didn't even look my way. He took that candlestick. I was so ashamed. I was so mad, I scratched the table I was on.

P: Well, luckily for me, the next person picked me and took me home with him. [Editors note: Byron chose The Pagoda as Second Prize in the first Am-Am!!, exactly four places ahead of when the Official Am-Am!! Officials expected The Pagoda would be chosen—there were five prizes that first year.]

TTT: So how's your life been since then? 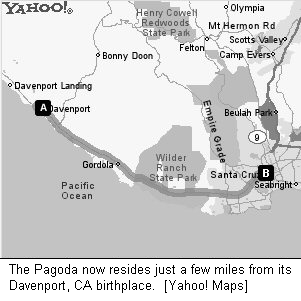 TTT: Where was that?

P: At the cement plant in Davenport. It's just up the road about 10 miles. So it's a little like going home again. The weather is cooler, the scenery is nice. I really like the neat geometric pattern in the brickwork here. Occasionally, I get a candle lit in me, which fills me with a warm glow. Never got that in Hayward, I can tell you that much. There, all I got were some hot rocks to sit on and I could only stare at the back of an overgrown iris bush. Cars drove by all the time. It was noisy.

TTT: So you're happier?

TTT: How do you spend your time?

P: I'm a philosopher of sorts. Mostly Confucian, as you could probably guess. Don't really get out much. 'Course, what do you expect from a cement pagoda?

TTT: Did you ever expect you'd be making such history that day?

P: No, actually I was just happy to be out of the car; that was my first thought. But now, it's kind of neat to think that tens, or even dozens of people think of me about once a year. Little cement pagodas really can't ask for much more than that.

TTT: Do you have any words of advice for this year's players?

P: Since I really can't putt, I don't have much to say about the golfing part, but I'd hope that everyone takes a little time to appreciate the sacrifice, and even the emotional toll, that the various prizes are sacrificing for your enjoyment. Ugly glass figurines have feelings, too, you know. Oh, and don't forget sunscreen.

TTT: Well, thanks again for your time.

P: It's been a lot of fun, and ... wait a second, you look familiar. Weren't you the guy who stuffed me in the trunk? The one who kept laughing at me?

P: Hey, come back here—let me whack you on the knee with my roof, you rude...

TTT: So, goodbye, and see you next time with another Am-Am!! historical interview.

Much of the above is fictious, and it's meant in good fun. Most of the quotations are made up. For more information, please read the Official Am-Am!! Privacy Policy. It's funny. Read it.

Back to Am-Am!! Home