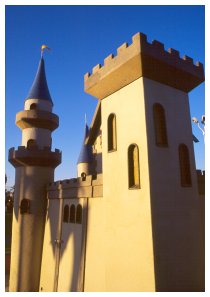 The Am-Am!! is an invitational minature golf tournament in which we play four rounds in one day. The first three rounds are played in "random" foursomes. The final game is played in foursomes grouped by score. It's a chance to putt around, meet new and old friends, and take a shot at winning prizes.

Ever hear of the Pro-Am where a professional and an amatuer play an overrated round of golf? We don't got no professionals. 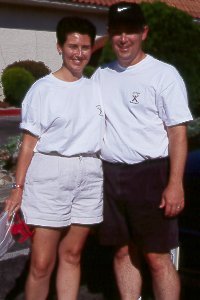 History of the Am-Am!!

It all started in 1994 when the official Am-Am!! Officials moved into their new house and discovered that the previous owners left them a lovely cement lawn pagoda for which they had no use. They unsuccessfully tried to unload it at their house warming party, but the three-month-old refused to take it home.

Searching for a creative way to get rid of (excuse me, bequeath) the pagoda once and for all, they created the Am-Am!! in 1995.

The First Annual Am-Am!! was quite the test of endurance. Not only did the original seven particpants play four rounds on a very hot day, but each round was at a different course, starting in Castro Valley and finishing in Santa Cruz! [more photos] 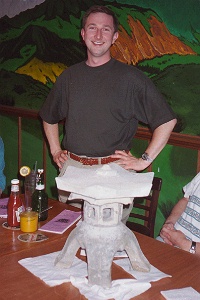 The Second Annual Am-Am!! grew to fifteen participants. The grueling drive was eliminated by playing two courses at each of two locations. Karts-N-Golf, a uniquely challenging pair of courses, was selected for the final two rounds. With its bonus holes and penalty cups, there's tremendous opportunity for the competitive players to mix it up. [more photos]

Still growing. The Fourth Annual Am-Am!! took the tournament to new heights with the first ever official Am-Am!! t-shirt and the founding of the Am-Am!! web site. Twenty-seven putters donned their mandatory "Putt Up Or Shut Up" shirts and made it a great day. [more photos] 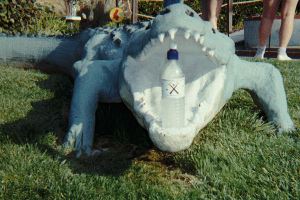 In 1999 the Am-Am!! Joel unseated the participant formerly known as Champion (Rob) and a new Am-Am!! Prince was crowned. Joel putt like it was 1999, while thirty-one other par-tee-ers invaded Camelot. Participants battled the alligators in the moat to quench their thirsts with the first Official Am-Am!! Water Bottles. But those weren't the only innovations. This year Terrie was knighted the first Official Am-Am!! Semi-Official, and the HROS (Highest Ranked Opposite Sex) award was introduced. Carrie, the 1998 HROS, presented the almost-as-coveted Green Polyester Goodwill Vest to Ellen at the victory celebration at Round Table Pizza. [more photos] 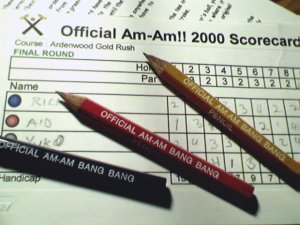 The Sixth Annual Am-Am!! was a year of diehards, with 16 of the 20 participants having competed in previous years. Beth proved invaluable as this year's Offical Am-Am!! Semi-Official. New innovations included customized scorecards, a few (hundred) customized golf pencils, and a beta test of a prototype Am-Am!! Electronic Scoring System engineered by Steve R. The tournament was also rocked by a scandalous photo discovered in the days following the event. See related news story for details.

The Seventh Annual Am-Am!! held on September 15, 2001, proved to be something we all needed — a fun day with great friends. Twenty-six putternauts gathered in Sunnyvale and Ardenwood. Still recuperating from back surgery, Toni spent the day on the sidelines, as a full time Official Am-Am!! Official. Once again, Beth earned her title of Official Am-Am!! Semi-Official, helping Toni keep everything organized and preventing her from lifting anything heavy. The Official Am-Am!! Ball Picker-Uppers helped spare putternauts' backs while the T-shirt and water bottles captured this year's theme of "2001: A Golf Oddessy". The day ended with a new champion, Tony, while Carrie reclaimed her HROS title. [more photos] 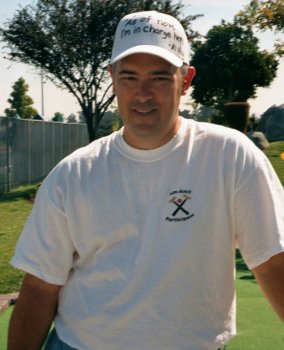 The Eighth Annual Am-Am!! was left to the questionable organizational skills of Rob, as Toni reluctantly relinquished control to recover from her surgery. Attempting to look official in his Al Haig “As of now, I am in charge here” hat, Rob sort of directed 26 participants through the day at Livermore and Ardenwood. With much credit to Terrie — promoted to Official Am-Am!! Three-Quarters Official — the day was a success.

The year's theme was set by the “This year it is just a miniature golf tournament” t-shirt — a quick and dirty (and lazy) revision of the first t-shirt designed back in 1998. Bowing to pressure from Toni, a limited number of haphazardly designed water bottles were provided, and all participants received a number of Official Marker-Marker of the Am-Am!! ball markers.

Revealing where his Am-Am!! energy was truly focused, Rob took the championship while Yuko reclaimed her HROS title. [more photos] 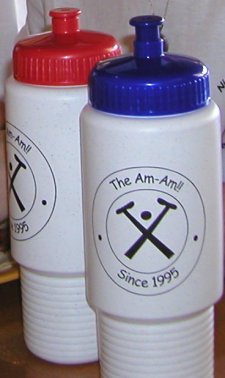 The Ninth Annual Am-Am!! was the Year of the Tony/i Awards. Held on September 20, 2003, 28 nominees walked the red, blue, green, and purple carpets in hopes of hearing those coveted words, “and the green apparel goes to...” For Tony, it was his second win as he putted his way to victory as this year's wearer of the Green Polyester Goodwill Jacket. After a two-year hiatus, Toni returned to competition and took the HROS honors.

During the tournament, the nominees sipped water from their statuesque sports bottles and noshed on pudding cups under the Catering Tent in honor of this year's theme, “The Proof is in the Putting.” Interim nods in the form of color-coded bandanas were awarded after each round to cast all eyes upon the current leader (yellow), HROS (blue), and best previous round (red).

And in recognition of the importance of supporting cast and crew, a new award was presented to the team with the best score in the final round. Congrats to Heather, Nicole, Marc, and Mike for their spirited teamwork! [more photos] 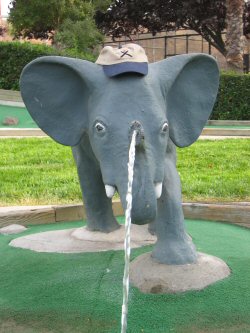 The decade celebration of Am-Am!! was the coolest event yet. Using their uncanny organizational skills, the Official Am-Am!! Officials predicted the early chill and knew that T-shirts would get obscured beneath sweaters and jackets. Sporting new embroidered baseball caps, 21 participants kept warm and took home severe hat hair. (For the Roman-numeral impared, the crossed putters logo form an 'X' to represent the Tenth Annual Am-Am!!)

The caps weren't the only new hat this year. With years of Am-Am!! data in the Official Am-Am!! Laptop, handicaps were computed and used to introduce the Handicap Award. Marc, the first winner of this new award, received one-year's use of the Green Junior Girl Scout Goodwill Cap. And — as typical with Green Apparel — it didn't quite fit.

In a repeat of the Ninth Annual Am-Am!!, Tony and Toni stole the show as Champ and HROS. Fourteen other lucky participants took home (or at least left the building with) spectacular prizes. Four even luckier players earned Baskin Robbins gift certificates for Best Team Score. Congratulations to Steve R., Jason, Tom, and Ellen. 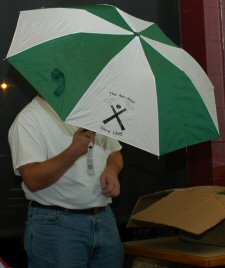 In honor of their newly planted Washington roots, and in eerie anticipation of the next day's rain, the Official Am-Am!! Officials presented all of the putters with an Official Am-Am!! Umbrella. 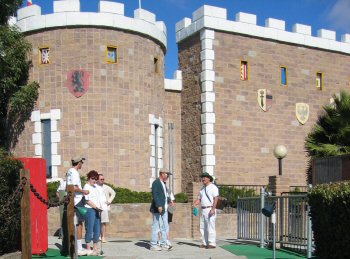 Eighteen rebels took on the 11th Annual Am-Am!! in a galaxy known as Redwood City. They attacked the Castle of Darth Malibu head on, wearing their sparkling white “May the Course Be With You” T-shirts.

When asked how he managed to slip a shot through the castle's tight defences (on the 18th hole of course 2), Rob “Skywalker” W. replied, “I used to bullseye womprats in my T-16 back in Battle Ground.” 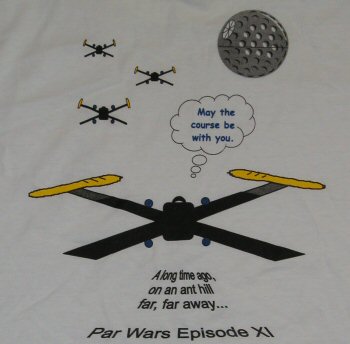 Two rebels, from planet Yukon, attempted a new strategy in the attack, allowing parents to tag-team between golfing and, uh, parenting. The success of this approach is still being analyzed.

In the end, the rebels won the battle, led by Tony G. The Course was with Ellen as she rose to the challenge of HROS. Kim was recognized with the special green fighter's helmet as her handicapped score proved the strongest. 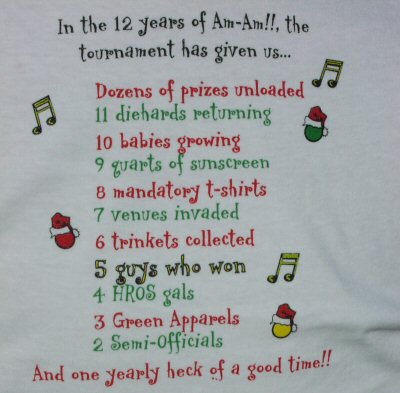 2006 marked the end of an era. With 14 golfers the 12th Annual Am-Am!! had the smallest turn-out since the first Am-Am!! For the first time ever, both Official Am-Am!! Officials won green apparel. Rob took the green polyester Goodwill jacket and Toni recaptured the HROS vest. Steve M. ambled away with the Handicap Award. 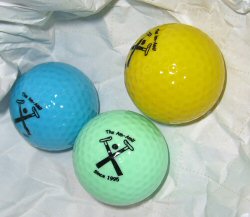 Christmas creep reached the Am-Am!! The annual t-shirt celebrated the 12 Years of Am-Am!!, and the awards dinner was full of presents. Everyone was presented a 3-pack of Official Am-Am!! golf balls, and the opportunity to visit the Pacific Northwest next year. It was made Official — the Am-Am!! is moving closer to Santa's workshop. Starting next year, look for us in Washington (the state!). And you don't have to wait long. Due to global warming and the shifting seasons, the Am-Am!! is scheduled to move to August. 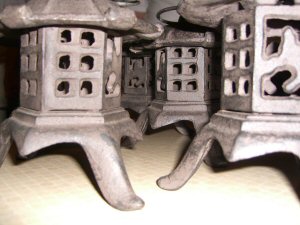 The Thirteenth Annual Am-Am!! marked a change of plans and the end of an era. Declaring themselves tired and hopeful that others will pick up the putter in future years, Rob and Toni hosted their final Am-Am!! on September 15, 2007. 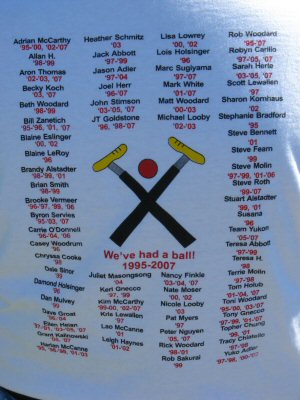 Reminding many of high-school graduation t-shirts, participants enjoyed using the “We Had A Ball” t-shirt to reminisce about the 68 different friends who played in the Am-Am!! over the years.

History was made at the end of the first round, when Toni became the first female to ever take the lead, making Aid the first-ever male HROS. The universe quickly shifted back into place, with Tony taking and maintaining a commanding lead for the rest of the day. Marking his fifth championship, Tony's name will be the last one emblazoned on the Green Polyester Goodwill Jacket while Toni celebrated her fourth win as HROS. History was again made as Aid captured his first piece of green apparel with the Green Junior Girl Scout Goodwill Cap.

Destined to provoke tears, Aid handed out an Official Am-Am!! Documentary DVD at the awards dinner. Contact the webmaster if you'd like an extra copy. Participants also received an iron-cast pagoda — perfect for displaying last year's Official Am-Am!! Golf Ball — harkening back to the cement pagoda that started it all.

Back to Am-Am!! Home